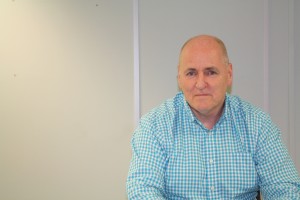 Last Friday one of the longest serving members of our team retired. General Manager William (Bill) Porter first joined the organisation in 1971 and over two stints has been with the company for over 25 years. He is all set to enjoy a few well-deserved rounds of golf – but not before we have paid tribute to a company legend.
Ted Heath was PM and Rod Stewart singing about ‘Maggie May’, when a young William Porter decided to take a leap of faith and left a job as a rep to join the newly formed Wrights Plastics as Office Manager at their base in Aston, Birmingham. There were just four employees in total, headed up by John Wright, father of current MD Mike. Bill particularly recalls John’s negotiating skills, taking full advantage of the currency fluctuations of the Heath and Wilson period.
Bill’s dedication contributed to the speedy growth of the company but after ten years Bill decided to go it alone and set up a manufacturing base in Brierley Hill (later Kingswinford) specialising in point of sale and display items. With the “best catalogue in the business” and his powers of persuasion and negotiation, he bagged some big name clients including Arcadia Group, BHS, House of Fraser and many others.  Bill always kept in touch with John and Mike and an opportunity arose for Bill to embark on a new role as an agent, selling bespoke point of sale products manufactured by Wrights Plastics
Eventually Bill rejoined the organisation following our acquisition of GPX as the company expanded rapidly into new markets.
Happily Bill says he has no regrets about his career or his time at Wrights Plastics. He believes the sector has changed rapidly over the past few years, driven largely by technology and globalisation. Bill believes it is important to concentrate on the positive changes. He remains optimistic about the company and has always admired the way John and then Mike ran the company. “Today it is in a very strong position – able to undertake the investment needed to stay competitive in a global market.”
Bill adds Wrights Plastics has a loyal and dedicated workforce and takes this opportunity of thanking them for their support and extending his best wishes to them all.
Bill’s children and grandchildren (another on the way) live in Ireland and Australia so travel will be a feature of his retirement – but rumour has it that there may be a round (or two) of golf to keep him fit and active.
Wrights Plastics MD added “Bill has been close to the family for a long time – helping my father establish and grow the business then supporting me when I came to take over the reins. Everyone in the company will miss his commitment and dedication. We wish him a long, healthy and handicap-reducing retirement.”
All of us at Wrights Plastics wish Bill all the best for a lengthy retirement.