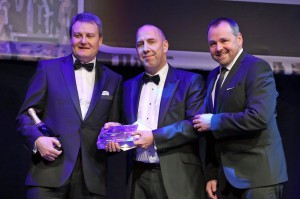 Wrights GPX were last night announced as Winner of the Manufacturing category at the prestigious Birmingham Post Business Awards 2014. In a lavish ceremony at Birmingham’s International Convention Centre we saw off some stiff competition to be announced at the winner in the category sponsored by Jaguar Land Rover.
The win is recognition of our tremendous growth in 2014 which saw a 40% increase in turnover and increased staff levels during this period as well as expanding their business through successful work for clients such as Marks & Spencer, Tesco and Selfridges. They have also invested over €500,000 in the cutting edge technology and plant to support their expansion aims.
The awards aim to recognise the businesses who have helped return the region to growth. The judges considered a range of criteria including strong financial performance, job creation, investment and service innovation. MD Mike Wright said “We are delighted with the award which recognises the hard work of all the team not just in 2014 but over many years.”