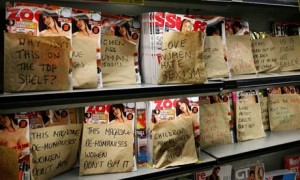 This month’s controversy over the retail display of ‘lads’ magazines has reminded many retailers of the value of magazines to their businesses. Although overall sales may be declining, they remain an important element for many independent retailers – and effective point of sale can help increase sales and bring many other benefits.
The controversy over such lads mags is actually a diversion for many retailers as sales of such magazines have been in free fall. ‘Nuts’ for example saw a 31% decline in sales during 2012. The market continues to be dominated by two important sectors: women and children.
Certain children’s titles can see phenomenal growth depending on the latest marketing development. The magazines are often linked to film, TV and toy promotions. The female magazine market is massive as it incorporates home interest, TV listings, glamour & fashion magazines as well as the more tradition ‘Womens Weekly’ type magazines.
Any smart retailer will realise the purchasing power of these two sectors. Even if overall magazine sales are in decline, they can act as an important factor in enticing these two markets into the shop – with spin-off and related sales benefiting the business.
Magazine wholesalers will provide support for retailers but the smart independent will be able to develop this loyal market. Awareness and promotion of the latest launches and special editions of regular magazines is a good place to start. Linking magazines to current affairs or hot news will also bring additional sales – think of the recent birth of Prince George and the explosion of related magazine front covers as a prime example of linking retail display with ‘hot’ topics.
Retail display and point of sale is, naturally, the key to developing your sales. There are many different options to display your magazine stock. Wall mounted bays such as  Streamline have been – and remain – the traditional way to make the most of your magazines and newspapers. However, there are now a vast range of freestanding display units that can be used throughout the store to put the magazines exactly where they are needed – in front of your customers. Smart magazine display stands are lightweight and easy to clean and can be used to promote season specials, special editions and new launches. They can be placed close to confectionary or toy displays to link to promote kids magazines, partworks and sticker albums. Use them in the food aisles to promote cookery and health magazines.
With careful planning and some great POS, there is no need to cover up the sales from your magazines.