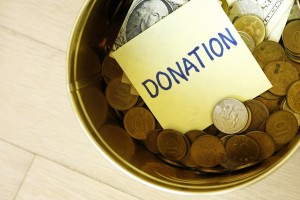 Last months blog looked at the use of suggestion boxes for retailers but we also think they have an important role in helping charities boost there fundraising at a time when it is getting harder and harder to raise funds.
Donations to charity have fallen by 20% in real terms in the past year, with £1.7bn less being given, according to a report compiled by the Charities Aid Foundation and the National Council for Voluntary Organisations.  The amount fell from £11bn to £9.3bn in 2011/12 – a fall of £2.3bn when adjusted for inflation, the study said. The number of people donating fell – as did the amounts they gave, from an average of £11 to £10 a month. The report was based on a survey of 3,000 people. The CAF and NCVO said Britain remained a “generous and compassionate society”, but charities were nonetheless facing a “deeply worrying” financial situation. “Some are having to close front-line services. And some are having to make redundancies. We are painfully aware that some face closure.”
The report said it suspected small and medium sized charities were being disproportionately affected by the reductions in giving, and this is where the humble suggestion can be effective. Any donation to a charity is welcome but being able to keep in touch with the donor will mean the charity has a greater chance of further donations. Therefore, use the box to collect signs up for future marketing contact.
The great thing is the boxes can be used at almost every event. If you raise money through car boot sales, jumble sales or table top sales, then clear some room for the box and take some printed cards along with you. Use all your charm or leverage the appeal of the charity to encourage people to complete the forms and pop them into the suggestion box.
If you money through flag days or demonstrations in malls and shopping centres, turn single donations into potentially life long commitments through some handy data capture cards and the branded suggestion box. The boxes don’t cost much so a charity can easily invest in a number to cover a wide range of year long fundraising. Made from durable acrylic the boxes will take the strains and knocks, and become a handy tool in your charity fundraising box.If you have used suggestion boxes to build up a donor database, let us know – we’d love to hear from you.