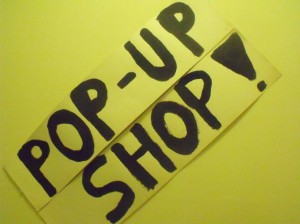 Not sure about your experience but for us at Wrights GPX Christmas 2012 was notable for the number of pop-up shops to be seen. In nearby Birmingham we counted dozens, with some surprises. Point of sale display plays an important part in the success of the shops.
One surprise in Birmingham was the troubled chain HMV. They had closed their flagship Birmingham store earlier in the year, but opened two pop-ups in the City centre to maximise retail sales. Likewise in Sutton Coldfield, a short lived shop was closed in 2012 but a pop-up store opened literally around the Mall for November and December.
The growth of pop-up shops is, of course, a sign of the decline in both consumer spending and the High Street but they also offer opportunities for retailers. Vacancy rates are still on the decline. The GB average disguises some significant regional differences. Broadly London and the South has an average vacancy of 12.7% while Wales, the Midlands and North see an average of 18.5% vacancy and Scotland at 16.7%. The worst performing region overall is the North West with 20.1% vacancy. All regions have seen vacancy increase over the last twelve months save for London where it has fallen from 10.7% to 10.1%. Vacancy in large centres has increased very slightly to 16.2%. Medium-sized centres stand at 15% vacancy and small centres have improved from 11.5% a year ago to 10.6% at the half year.
For canny retailers with an eye for effective point of sale display, promotion and the right stock at the right price, this new phenomenon offers many opportunities and High Street manage should welcome more short-term rentals as this is the type of ‘event shopping’ that will bring in the stay-at-home consumers.
Creating effective point of sale display from off-the-shelf items such as display plinths, poster holders, shelving and other items won’t cost the earth, and they can be used again and again.
We’d love to hear from any business with experience of pop-up retail – or those who are thinking of making a start in 2013!
Remember to watch this space as we will be releasing a range of great blogs over the coming months. Our readers can also find our Wrights Plastics GPX Facebook page at http://www.facebook.com/WrightsPlasticsGPX. For all the latest goings on, you can keep up-to-date with Wrights Plastics GPX on Twitter https://twitter.com/WrightsGPX. And we also now have an Wrights Plastics GPX Google+ page live at https://plus.google.com/u/0/117105393331417807514/posts.